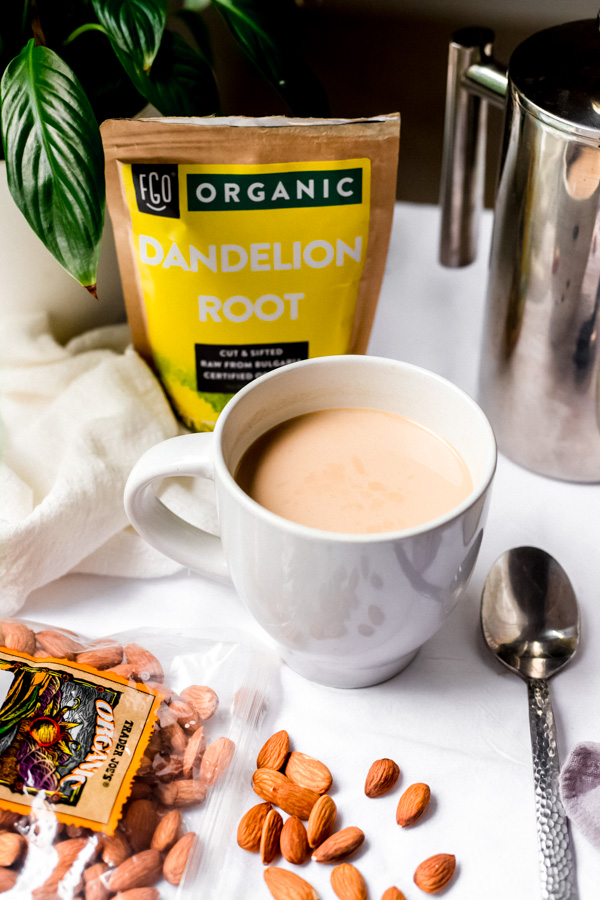 If you've never heard of this amazing coffee alternative, you're in for a real treat.. especially if you're like me and can't have coffee right now but desperately miss the taste of a good cup of joe in the mornings.

I'm currently breastfeeding my newborn and have chosen not to drink coffee just yet, but mannn do I miss a nice warm cup of coffee in the mornings. Seriously, it's what I use to look forward to every morning! I don't even care about the energy it may or may not give me, I mostly enjoy coffee because of it's taste - with a nice creamy homemade cashew milk like the one in this recipe, ah... I miss that.

But I have found my replacement - roasted dandelion root tea - and I'm so freaking excited about it. I swear I've been drinking a cup of this stuff every morning for a few weeks now and I think I've tricked my brain into thinking it is actually coffee haha.

What is roasted dandelion root tea: 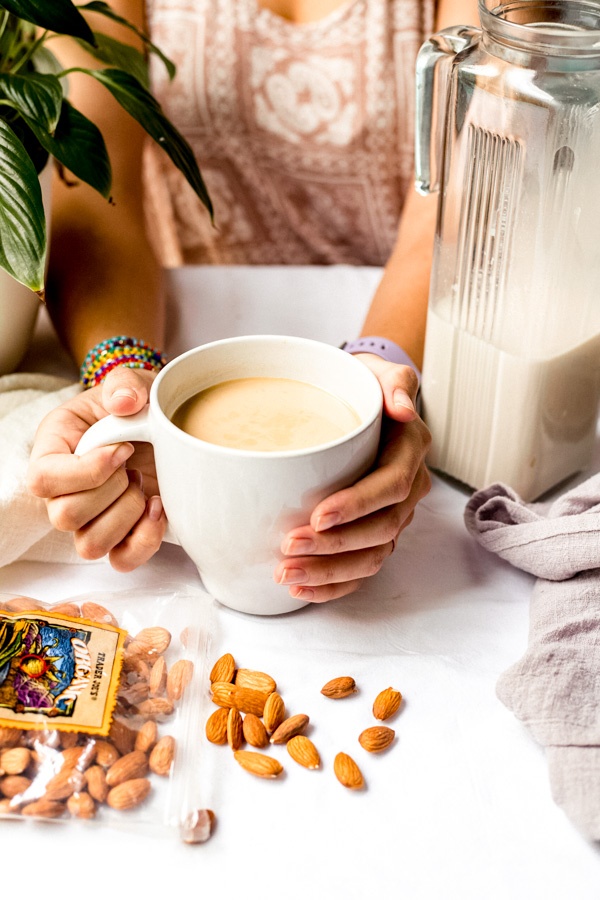 why is dandelion root tea a great coffee alternative:

Roasted dandelion root tea is very reminiscent of coffee. It smells like coffee, looks like coffee, and even has that deep bitter rich taste that is very similar to coffee. The best part is, it's caffeine free! You get to enjoy all the perks of coffee without any of the caffeine.

Caffeine is not bad but there are people who can't tolerate it. Some people get really anxious, jittery, and nervous after consuming caffeine - dandelion root tea would be a great alternative.

Also for those mamas like myself who are either pregnant or nursing and would like to avoid caffeine - dandelion root tea can be a great alternative. However, remember to always ask YOUR physician if it's okay for you to drink dandelion root tea as it is passed through the breast milk. It is an herbal tea after all and has not been approved by the FDA.

what are the benefits of drinking roasted dandelion root tea:

The main benefits believed to be associated with drinking dandelion root tea is liver detoxification and improved digestion. It is also a rich antioxidant, which helps the body fight free radicals and helps reduce inflammation. Dandelion root tea can also be a potent diuretic (makes you urinate a lot - similar to coffee) so make sure you speak to your doctor before taking this tea to make sure you don't have any contraindications. 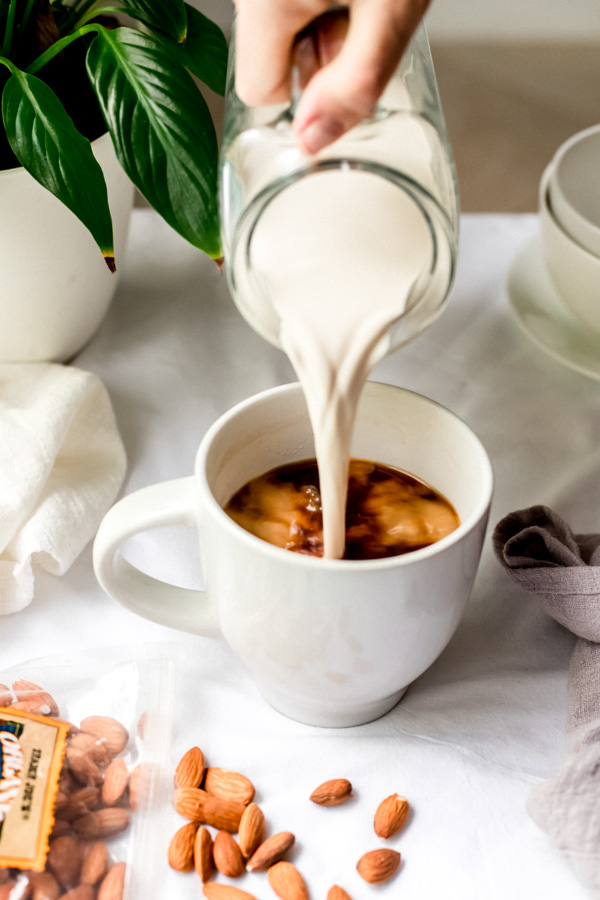 how do you make roasted dandelion root tea:

My favorite way of making dandelion root tea is to purchase the dandelion root off of Amazon. The brand that I buy is called Feel Good Organics - they have a small bag that you can purchase to try it out, and also a bigger bag that is more cost effective and will last longer. It is a loose tea which means that it does not come in small tea bags but i like it this way.

I get a 1/4 cup of the loose dandelion root and I roast it myself in the oven. I usually roast it at 350F for 4 to 5 minutes, or until there is an aroma and the roots are golden brown. Make sure to keep an eye on this the first time you do it because every oven is different, and you do not want to burn your roots (like I did the first time around - whoops).

Once I roast the roots I transfer them to a french press like this one and I let the roots steeps in boiling water for about 10 minutes or so. If you do not have a french press you can use a tea diffuser (these are really handy to have around) or just strain the tea after letting it steep with a strainer. 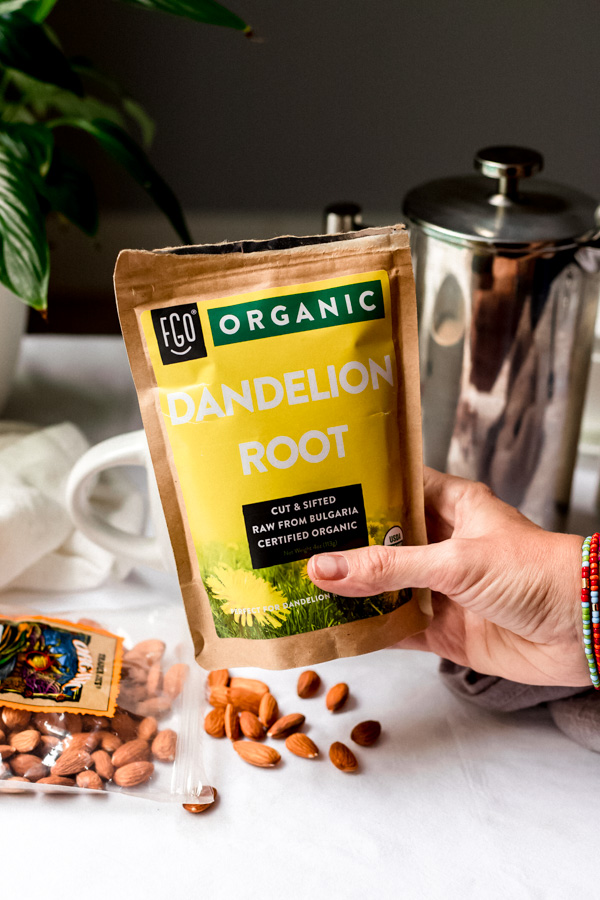 Once you have your dark tea you can enjoy it as is, however it is bitter. I like to add a little bit of homemade cashew creamer or homemade almond milk and a tablespoon or two of maple syrup, honey or agave.

Another easier alternative to the loose dandelion root is to buy premade dandelion root tea that has already been roasted and is sold in tea bags. A good brand that I trust is Traditional Medicinals - click here to see their roasted dandelion root tea on Amazon. I haven't tried this flavor but the reviews are positive.

how to make homemade almond milk

How to make roasted dandelion root tea: A healthy alternative to coffee 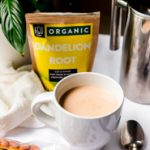 Dandelion Root tea is made from the root of the dandelion flower. When perfectly roasted in the oven it magically tastes like a nice dark rich cup of coffee. Dandelion root tea makes for a perfect alternative to coffee for those who are looking for something different. It even looks like coffee, and sort of smells like it too! Try it for yourself! 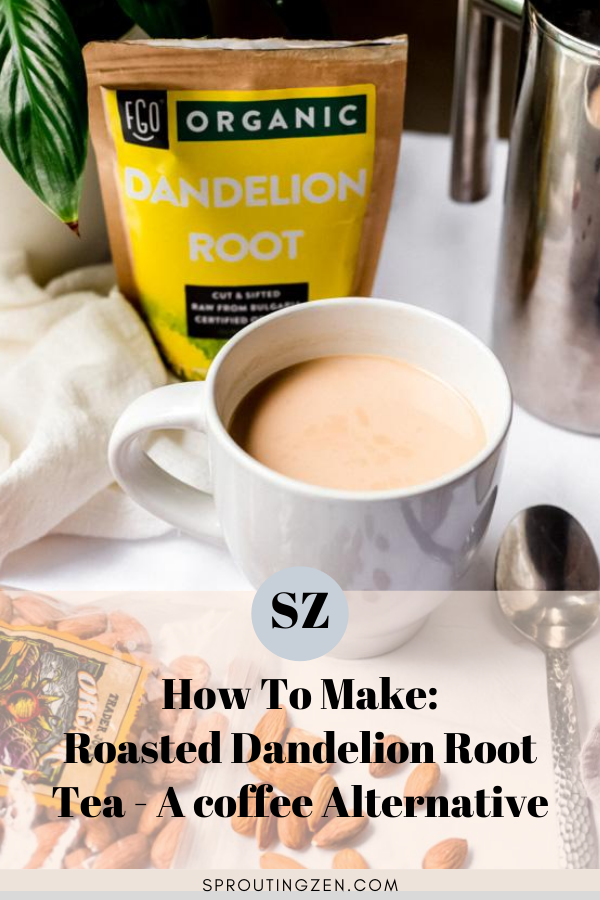 This website uses cookies to improve your experience while you navigate through the website. Out of these, the cookies that are categorized as necessary are stored on your browser as they are essential for the working of basic functionalities of the website. We also use third-party cookies that help us analyze and understand how you use this website. These cookies will be stored in your browser only with your consent. You also have the option to opt-out of these cookies. But opting out of some of these cookies may affect your browsing experience.
Necessary Always Enabled
Necessary cookies are absolutely essential for the website to function properly. This category only includes cookies that ensures basic functionalities and security features of the website. These cookies do not store any personal information.
Non-necessary
Any cookies that may not be particularly necessary for the website to function and is used specifically to collect user personal data via analytics, ads, other embedded contents are termed as non-necessary cookies. It is mandatory to procure user consent prior to running these cookies on your website.
SAVE & ACCEPT
190 shares
Scroll To Top