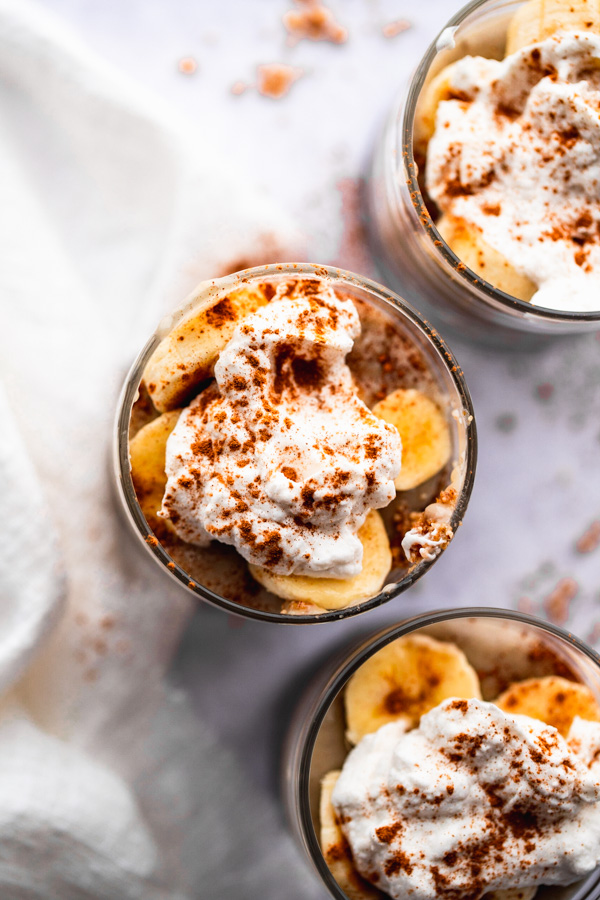 I don't think I've ever had banana cream pie.

It's just not something Cuban households do. We eat bananas with dinner. Yes, we're big on that sweet and savory combo.

But turning bananas into a pie? I can't recall.

However, when I came across Pinch of Yum's (and one of my all-time favorite bloggers of all time) two-person banana cream pies, I was literally drooling looking at the photos.

I wanted to try it.

But I was determined to make my own version - and that meant it had to be vegan, paleo, gluten free, refined sugar free, and made entirely from scratch, because that's how we roll around here. 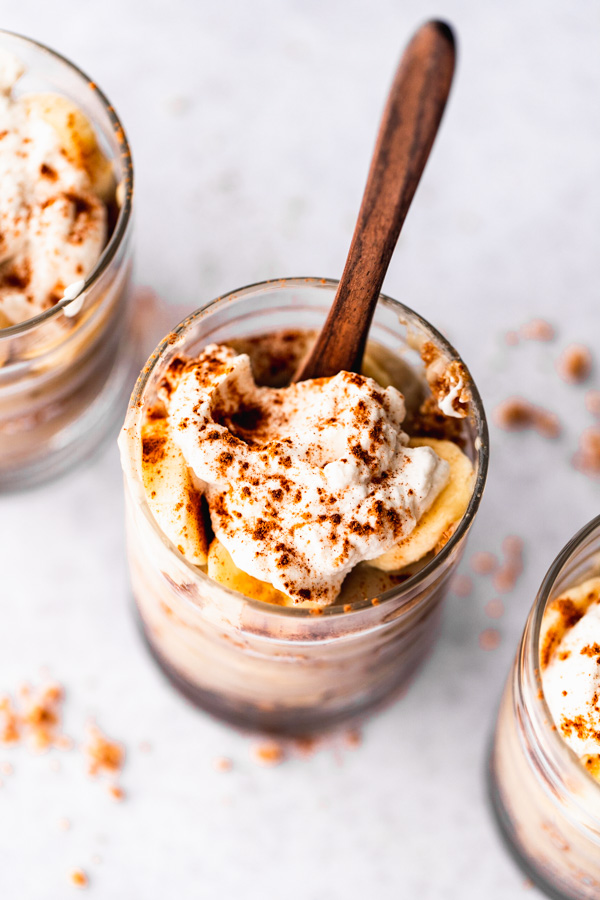 So this past weekend when I had a bunch of already-too-ripe bananas staring at me waiting to be used - I decided I'd go for it.

what is banana cream pie:

It is exactly what it sounds like. It is a pie made with a homemade pudding-like cream made using bananas, topped with whipped cream, and oh so delicious. Of course, if you like bananas that is, because the banana taste is obviously very pronounced.

I decided to keep my recipe simple and make them in jars as inspired by pinch of yum's no-fuss recipe because... it's Wednesday and I have a baby that won't nap so simple is my friend right now. For some reason making these banana cream pies in jar form seems less daunting than making one huge pie.

For the filling you will need:

You'll also need some type of jars - small mason jars work well or small 12oz jars like these. You can also use ramekins as a last resort! 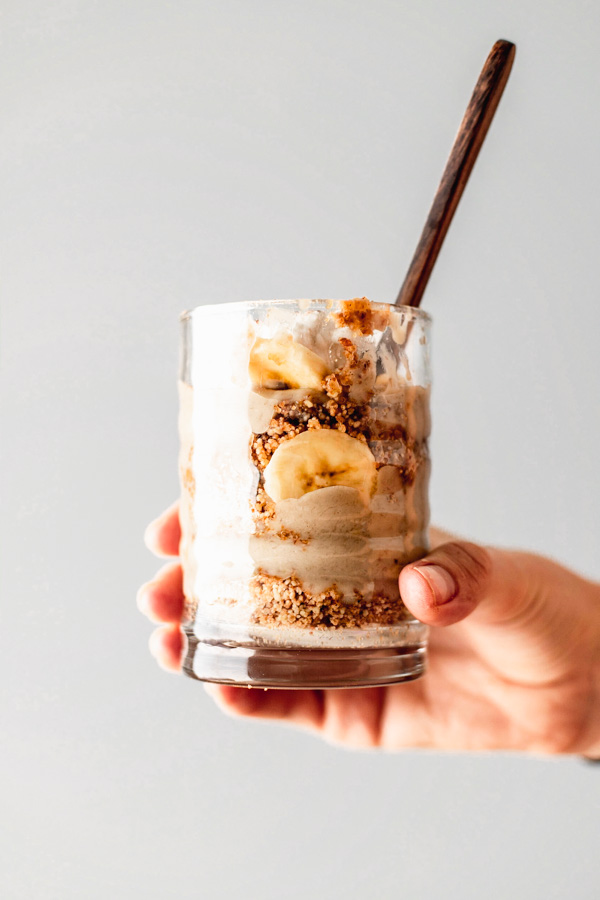 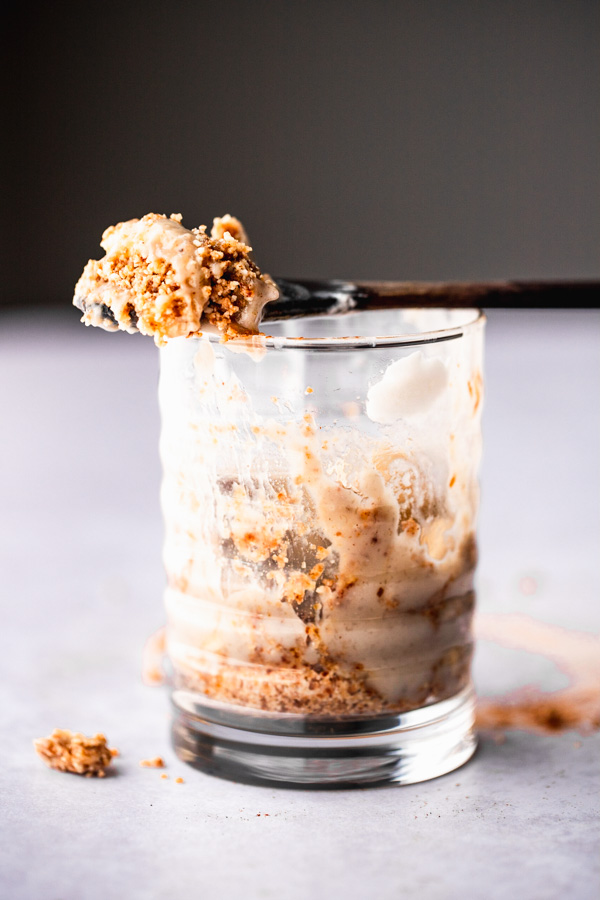 What is mesquite powder and why do I include it in the crust:

Another great reason to use mesquite powder is for it's superfood qualities! Mesquite powder comes from the seed pods of the mesquite plant. It is a great source of vitamins and minerals such as calcium, fiber, protein, magnesium, zinc and potassium. So not only are we getting that distinct graham cracker like flavor, but also the many benefits of this amazing food!

Making these layered banana cream pies are easy peasy, or as easy as pie? Haha.

But for real, once you've got your cream and crust ready all you have to do is layer the jars and you're done!

We start by roasting a banana at 350F for 10 minutes. Roasting the banana is totally optional but, it really does help intensify the flavor of banana in the pie. I recommend 10/10. Plus, while the banana is roasting you can be prepping the crust.

How to roast a banana:

Make sure to keep the peel on. Pop the banana on top of a baking dish and roast for 10 minutes, or until the skin of the banana is brownish/black. 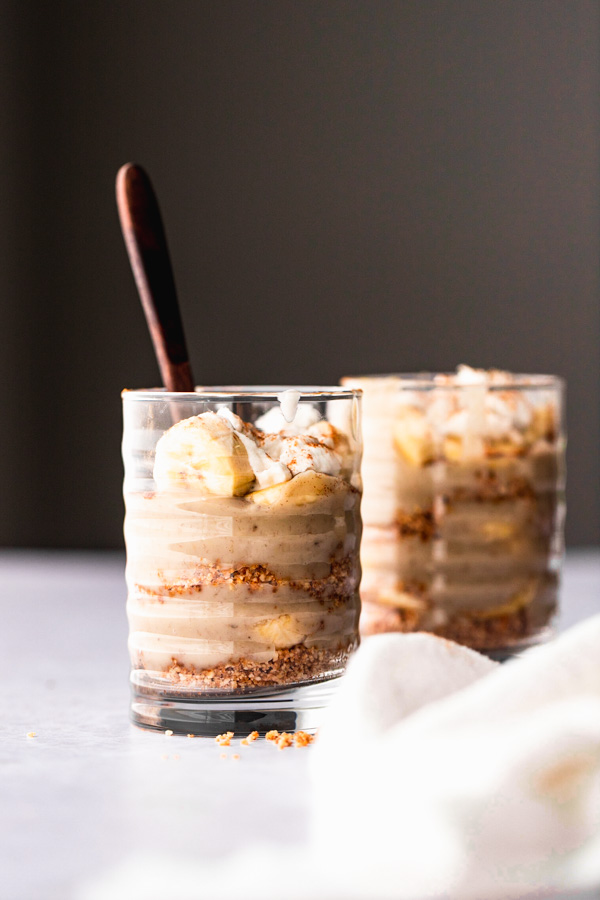 Add all ingredients to a food processor and combine until you get a sticky crumbly dough. You don't want it to be super sticky or nut butter-like.. just crumbly enough that you can layer it in your cups - see pictures for reference.

Once the banana is roasted you're going to make the cream pie by adding all ingredients to the food processor. Don't even worry about washing the food processor after making the crust, that's unnecessary. Combine everything until smooth and then transfer it over to a pot. 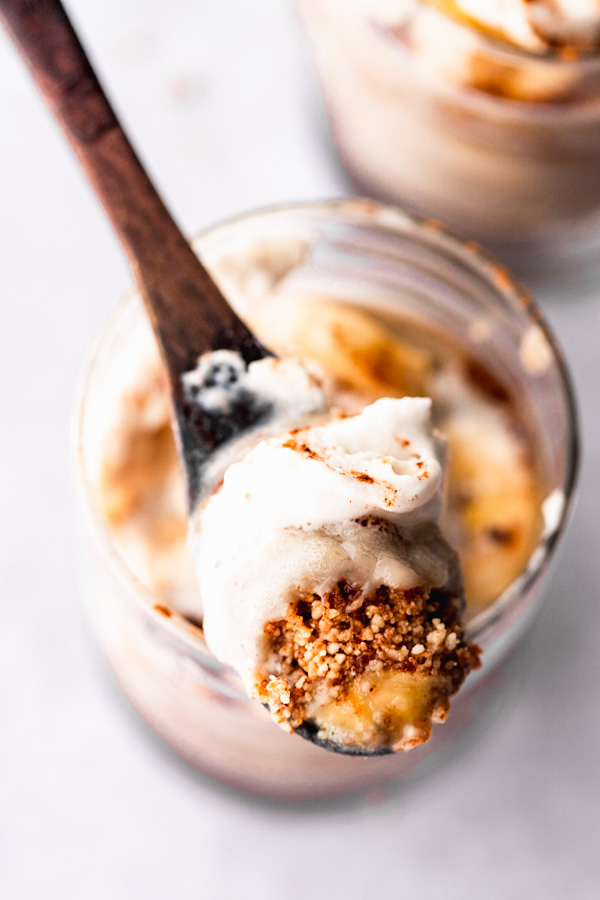 Now you're going to heat up the mixture while adding tapioca flour.

This is what's going to help it turn into a pudding-like cream. Many recipes call for cornstarch but in order to keep it paleo I wanted to try using tapioca flour. The verdict is - it works! I started with 2 tablespoons and it wasn't thick enough for my liking so I added a third. However, your experience may vary and you might only need 2 tablespoons - so always star with less - you can add but you can't subtract!

Now here's the fun part! Begin layering your banana cream pie jars. Start with some crumbly crust, then sliced bananas, and a layer of the cream. Then repeat. Crust, sliced bananas and cream. Top with a delicious vegan paleo whipped cream like this one (super easy recipe check it out) and a dash of cinnamon.

You can enjoy it nice and warm fresh off the stove, so good with the chilled whipped cream OR you can place banana cream pie jars in the fridge for a few hours to chill. 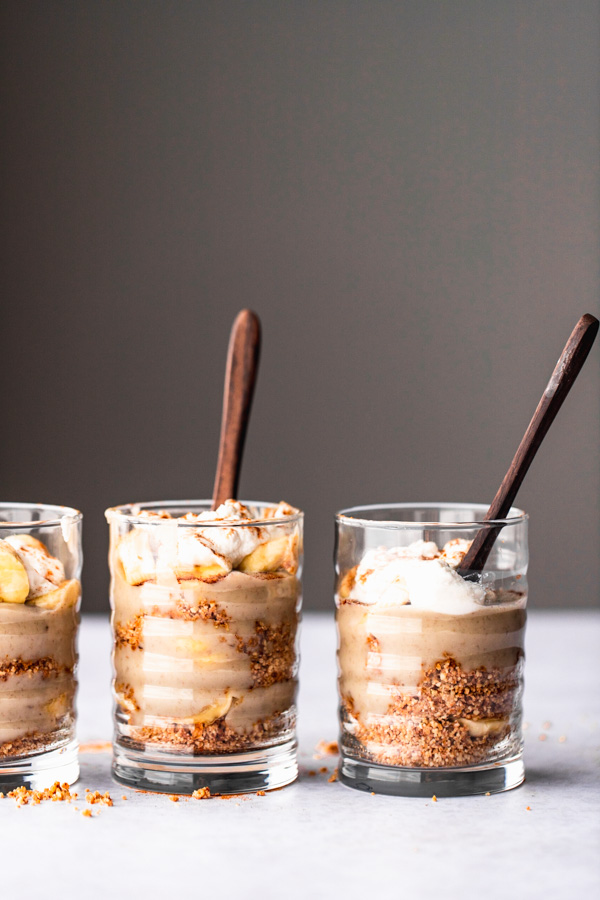 In the mood for more desserts? Try these. 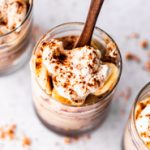 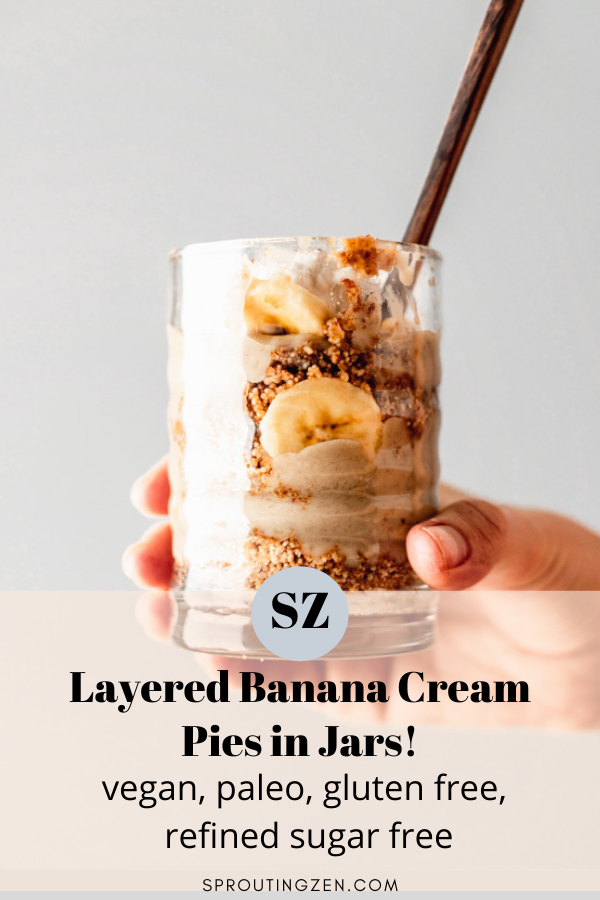 This website uses cookies to improve your experience while you navigate through the website. Out of these, the cookies that are categorized as necessary are stored on your browser as they are essential for the working of basic functionalities of the website. We also use third-party cookies that help us analyze and understand how you use this website. These cookies will be stored in your browser only with your consent. You also have the option to opt-out of these cookies. But opting out of some of these cookies may affect your browsing experience.
Necessary Always Enabled
Necessary cookies are absolutely essential for the website to function properly. This category only includes cookies that ensures basic functionalities and security features of the website. These cookies do not store any personal information.
Non-necessary
Any cookies that may not be particularly necessary for the website to function and is used specifically to collect user personal data via analytics, ads, other embedded contents are termed as non-necessary cookies. It is mandatory to procure user consent prior to running these cookies on your website.
SAVE & ACCEPT
347 shares
Scroll To Top