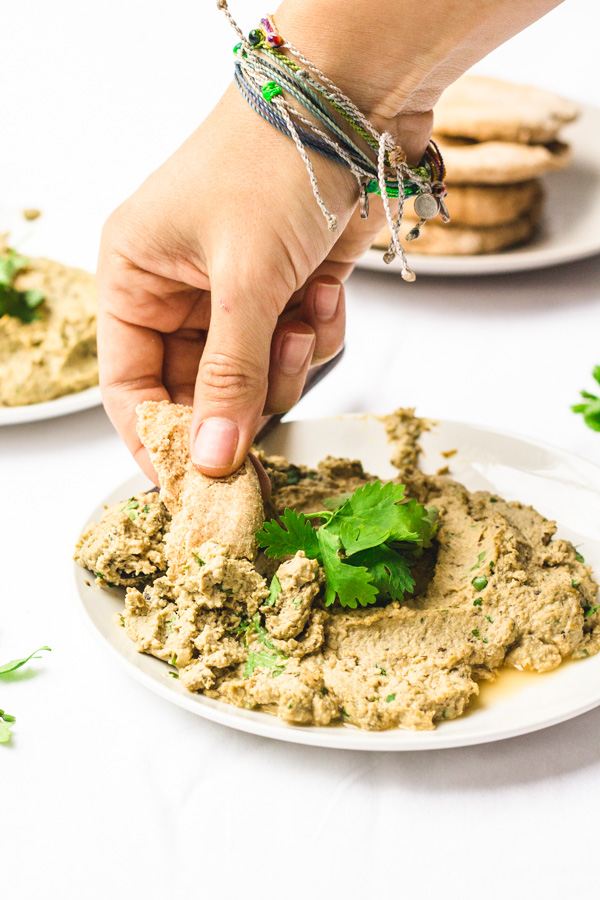 A quick and easy vegan babaganoush recipe made without oil and roasted eggplant.

Babaganoush - the first time I heard this word, was recently. Very recently. In south Florida one does not eat babaganoush. Maybeeee hummus, if that. But not babaganoush.

You see the thing is, growing up in south Florida surrounded by a primarily Hispanic family, food was always Cuban staples - rice, black beans, plantains, (and of course meat, lots of it.) 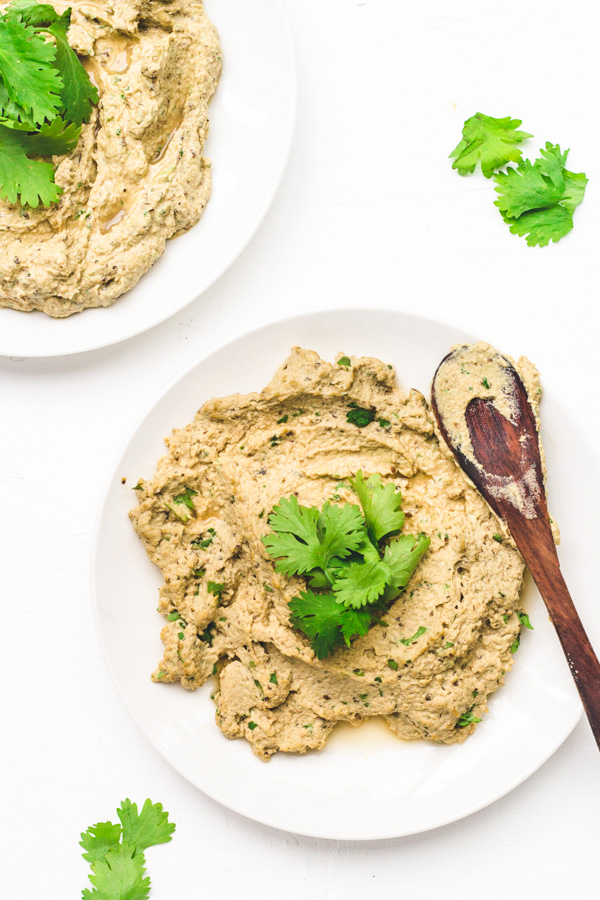 And what a shame that is because it is AMAZING!!! I am totally hooked and so is my boyfriend.... who has literally planted eggplants in our garden just to ensure that we continue eating this delicious dip (or spread?) for many more months to come.

On to the recipe:

This is a very basic recipe, but the thing is that traditional babaganoush itself is very basic. If you've got eggplant, garlic, tahini, and lemon juice - you've got yourself some babaganoush.

Of course you can dress it up more - add a dash of cayenne pepper,  a sprinkle of smoked paprika, more tahini, maybe even leave the skins ON if you're feeling extra generous (note: this does affect the color and texture of babaganoush but kicks it up a notch in the nutrition department.)

The part that takes the longest is prepping the eggplant. You need to salt it, let it sit so that it can release some of its extra water, wipe it down a bit and then roast it. 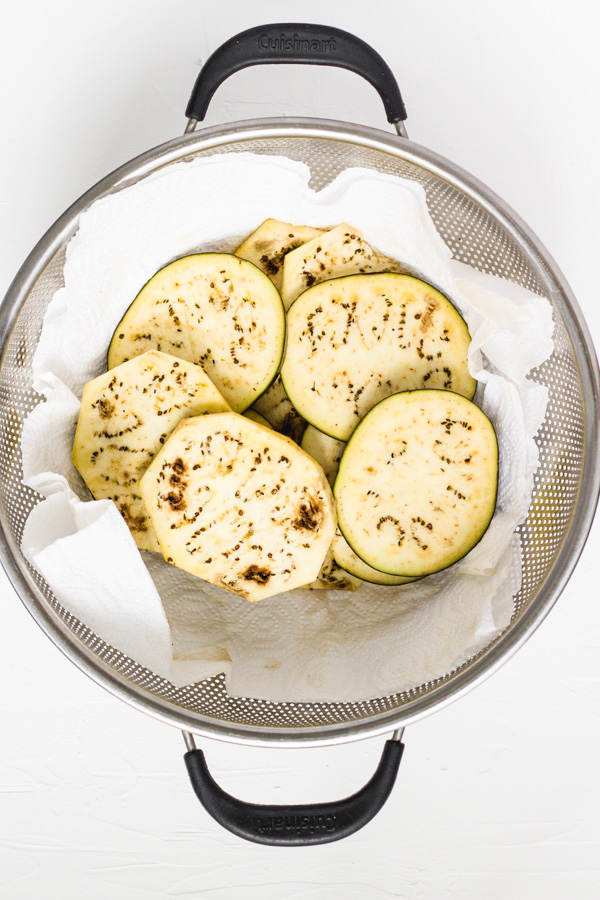 Traditional recipes call for roasting the eggplant in the oven for about 40 to 50 minutes until soft and golden brown. However, that is a LONG time and when you're craving babaganoush you want it NOW.

So, lucky for us - minimalistbaker aka genius in the kitchen - came up with a quick alternative to that, and instead experimented with using the BROIL setting to roast these babies up in, like, 10 minutes. Yes, now we're talking!

Instead of having to wait nearly an hour for roasted eggplants, you can turn them nice and soft and golden brown within 10 minutes using broil. But be careful friends, broil is nothing to play around with. It gets hot, quick! And can burn your food in an instant (trust me, it has happened to me, multiple times.) 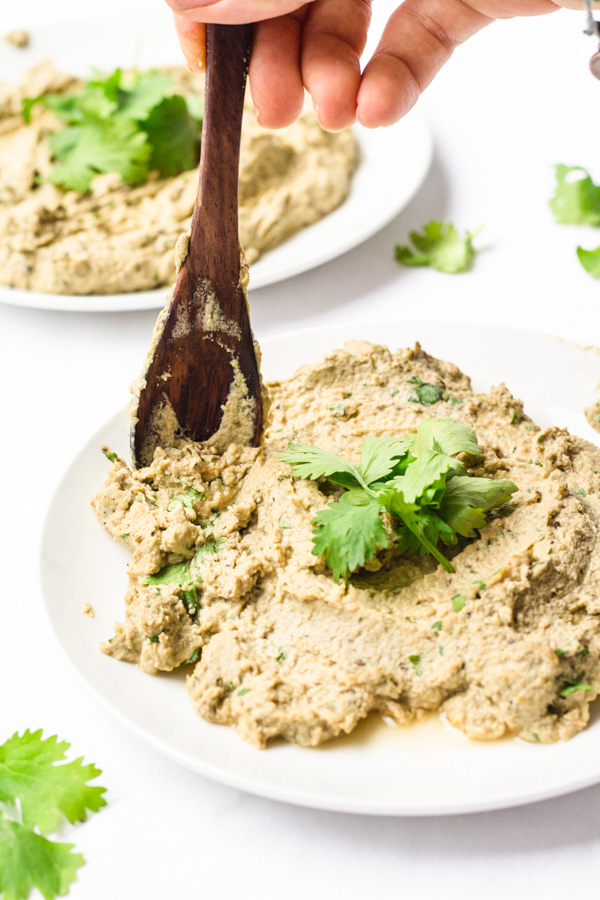 If using the broil method - stay near your oven at all times and keep an eye on the eggplant. In my oven, it takes 10 minutes total, five on one side, five on the other and that is using the LOW broil setting. Some ovens do not have medium/low setting so if using HIGH please note the roasting time will be much shorter.

I don't use refined oil in my recipes so this babaganoush is of course oil free. Make sure to coat the raw eggplants with vegetable broth before roasting - this will ensure a nice soft and golden roasted eggplant that won't stick to the aluminum foil. 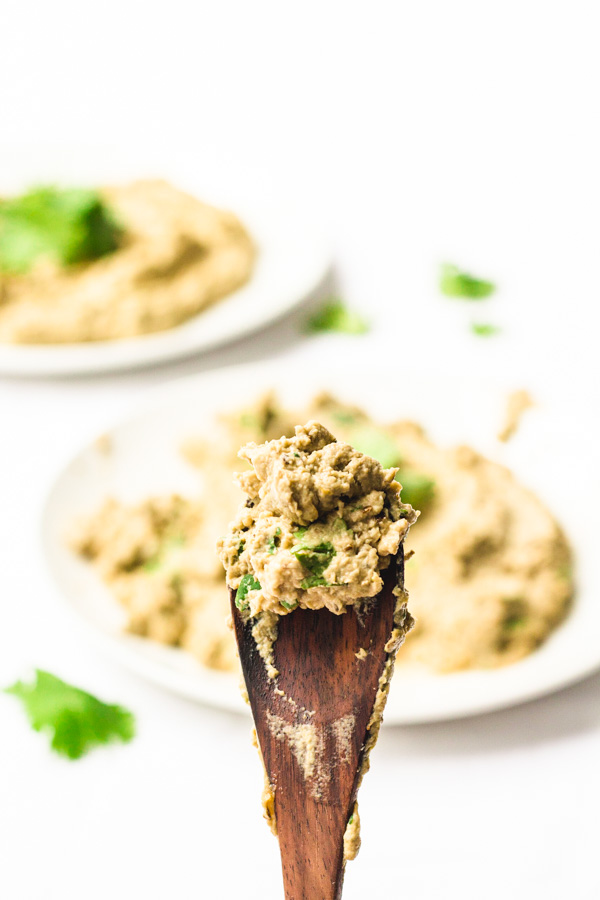 How to enjoy babaganoush:

Think of babaganoush as hummus' less famous cousin - but just as tasty if not more! 😛

You can enjoy babaganoush as a dip or as a spread. It tastes delicious with pita bread, crackers, and even raw veggies such as carrots and bell peppers. Serve it up at your next party or get-together as an appetizer or as a side to another main dish.

The possibilities are endless.

*This recipe was adapted from Minimalist Baker

Check out this tasty (and pretty) roasted beet hummus, or my favorite carrot garlic hummus! 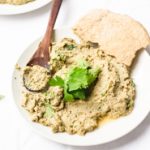 An easy babaganoush recipe that is quick, tasty and refined oil free.

Optional spices that you can also add:

Supplements are not FDA-approved, which doesn't me

This website uses cookies to improve your experience while you navigate through the website. Out of these, the cookies that are categorized as necessary are stored on your browser as they are essential for the working of basic functionalities of the website. We also use third-party cookies that help us analyze and understand how you use this website. These cookies will be stored in your browser only with your consent. You also have the option to opt-out of these cookies. But opting out of some of these cookies may affect your browsing experience.
Necessary Always Enabled
Necessary cookies are absolutely essential for the website to function properly. This category only includes cookies that ensures basic functionalities and security features of the website. These cookies do not store any personal information.
Non-necessary
Any cookies that may not be particularly necessary for the website to function and is used specifically to collect user personal data via analytics, ads, other embedded contents are termed as non-necessary cookies. It is mandatory to procure user consent prior to running these cookies on your website.
SAVE & ACCEPT
823 shares
Scroll To Top