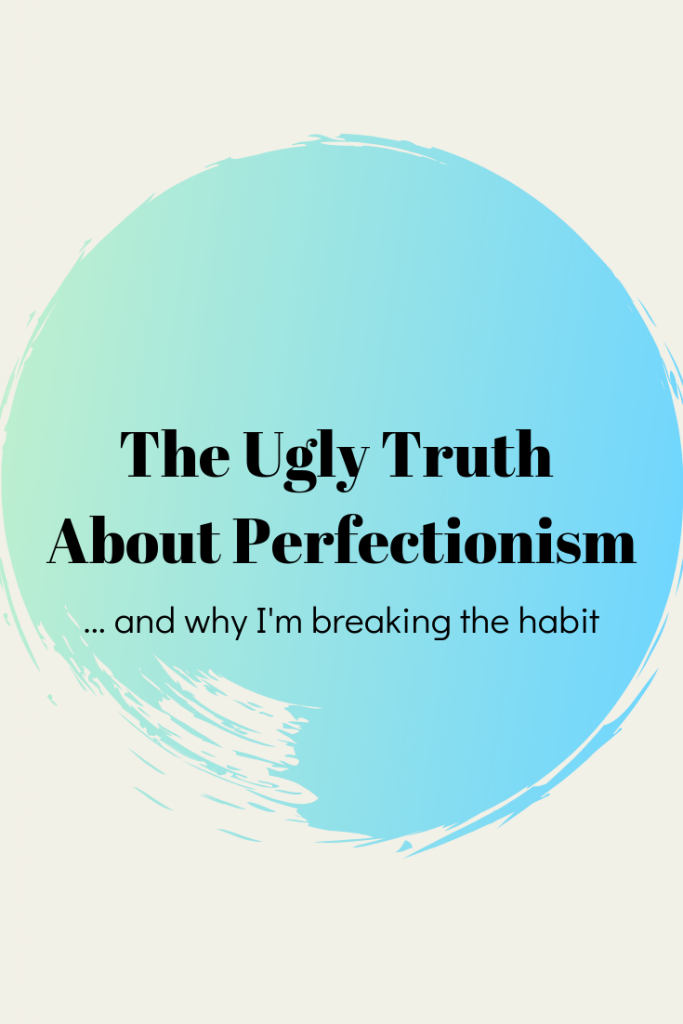 I am a recovering perfectionist.

For as long as I can remember striving for perfection in all areas of my life has been a constant factor, an obsession, a must - until now that is, because I'm done with perfectionism (or at least trying to be).

You see, the thing is, for a very long time (errr my entire life until right about now) I was blinded to the negative consequences that this pesky little personality trait can bring about.

I always thought perfectionism was something to strive for, synonymous with success and high achievement.. something we casually humble-brag about... like, for example, when we list it as a weakness on a job interview to indirectly say how hard-working we are without seeming unpretentious. har. har.

However, I've come to realize that there is so much more to perfectionism than meets the eye.

It is not always about having a good work ethic, wanting to do your best or achieving success for solely self merit.

Instead for some of us, myself included, perfectionism is much more psychological than that.

It is deeply rooted in fear.

Fear of being judged.

Fear of being criticized.

Fear of being seeing entirely as we are, imperfect and whole.

and this has grave consequences.

Perfectionism as a defense mechanism.

It does help to realize that perfectionism is not necessarily a positive trait that we should all be aiming to achieve, contrary to popular belief.

But instead, as Brene Brown calls it, perfectionism is a heavy-as-shit 20-ton shield that we carry around to protect our hearts and our inner child from shame, criticism, and judgment.

And let me tell you – that shit gets real heavy with time.

When I shifted my mindset and began to see perfectionism for what it really was.. a defense mechanism put in place by my inner psyche to avoid the pain of being judged by others, everything changed.

Something 'clicked' in my inner headspace and allowed me to see that my need for perfection wasn't based on me trying to be better for my own sake (which is totally acceptable), but instead, I was trying to be something for other people's approval of me.

I was making myself miserable holding myself to the highest of standards, never feeling good enough, always needing to do more, riddled with anxiety.. and all of this for what?

So that other's wouldn't judge me, or criticize me, or shame me... or worse - think I wasn't good enough (gasp).

Maybe it was turning thirty and finally entering the decade of no-longer-giving-a-damn-what-others-think,

or maybe it was listening to Brene Brown's witty talk on perfectionism,

but whatever the case... I've put my 20-ton shield down because I'm tiredddd of carrying that armor on my back.

Do yourself a favor, and place the shield down too. Your shoulders.. and your whole inner psyche will thank you very much.

Perfectionism is not always about self-improvement

Perfectionism, as a whole, is a hugely complex personality trait that has varying definitions and models depending on the research.

However, researchers tend to divide perfectionists into two groups - those that are merely self-motivated and set higher standards for their own personal motivation, and those that use perfectionism as a way to deal with the fears of being judged or criticized.

For the latter, perfectionism becomes a defense mechanism that has been put in place to protect themselves from getting hurt by the opinions of others.

Perfectionism is caring so greatly and being so afraid about what others think of you that you rather drive yourself crazy trying to be more and do more to meet unfathomable expectations placed on yourself BY yourself.

No one else is forcing this upon you but your mind.

No one else is judging you more harshly, than your self.

No one is criticizing you more roughly than the person looking back at you in the mirror every morning.

Perfectionists have higher rates of anxiety, depression, burn out, stress, and suicidal thoughts.

Some may argue that perfectionism isn't all that bad – and that perhaps that is the fuel that pushes them to do better, be better.

This article by the Harvard Business Review, studied various research articles on perfectionism and found that perfectionists do display higher self-motivation, conscientiousness (which is the quality of wanting to do one's work well and thoroughly), and hold themselves to a higher standard, which are all very positive traits and can prove to be beneficial in one's life.

However one must ask – at what expense? The same study also reported that although there were benefits to perfectionism, there were far more negative and detrimental effects.

The study found a relationship between perfectionism and high rates of anxiety, depression, suicidal thoughts, stress and burn out – all of which have increased dramatically over the last decade; and ironically enough so has the demand to 'be perfect' in today's society

and I mean, no kidding?!

I was not the very least shocked after learning about all these negative consequences related to perfectionism. When you are constantly judging yourself and being neurotic about every single detail in your life having to be perfect - that's enough to drive you insane! Been there done that!

That's not to say you should let everything go and have no ambitions or live in a pigsty. But it does mean that if the dishes don't get washed 'till the morning time, or the laundry doesn't get folded until next week - IT WILL ALL STILL BE OKAY.

And yes, you are still enough, so enough.

The fear of being seen completely, and therefore exposing yourself to being criticized is enough to paralyze you forever.

As a perfectionist, the fear of being seen completely and authentically, and the potential to be criticized by people you don't even know is enough to keep you from ever doing much of anything.

The same article by the Harvard Review found that performance was neither better (nor worse) compared to non-perfectionists and that this was perhaps due to the possibility of perfectionists spending way too much time trying to perfect certain work or projects while neglecting others.

One would think that being a perfectionist means you'd perform better and produce better work but research has shown otherwise. This is mostly due to the fact that a perfectionist judges their work so harshly that good enough is not good-at-all and they must continue to re-do the work until it is perfect.

They re-write the same page 10 times.

They change the words to the song 50 times.

And sometimes they simply just never get started at all, because if it can't be done perfectly, what's the point of doing it at all.

You'll always be perfect for some. And to others – you'll never be.

Aiming for perfection is aiming towards something that has no end and no clearly defined values.

What's perfect for one person maybe be terrible for the next. But a perfectionist cannot handle that criticism and will sit there hours on end trying to make something that is already good enough, even better.

Trust me, I've been there.

But there will always be another critic, time and time again.

The pursuit of perfection is a never-ending one.

And therefore the work remains stagnant.

The book never gets published.

The song never is sung.

What a sad story.

Because it happens every day with millions of people out there who are not living their dreams or sharing their gifts because they, too, are paralyzed by perfection.

When you start accepting 'good enough', the weight of perfectionism gets lighter.

It means allowing yourself to accept:

It's opening your heart and exposing your true self to the world just as you are.

And that's scary as f*ck.

Because we live in a society that values, rewards and even encourages perfectionism, and when you aren't perfect – you are criticized, and criticism hurts.

But you know what's on the other side of that pain? Growth.

And these are all much better feelings than the neurotic tendencies that perfectionism places on you.

Breaking perfectionism means having the courage to open your heart and accept life in all its messy ways.

Because the reality is that, contrary to what those perfectly curated social media accounts make you believe, life is a little bit of everything – it is both pretty and ugly,

and messy and tame,

It's time we stop trying to be perfect and embrace all aspects of life.

It's time we begin owning our stories – our messy-sometimes-chaotic-mostly-not-perfect wholehearted stories.

It's time we see the bigger picture and change our perspective.

Instead of seeing a messy imperfect home, be grateful for the life that thrives within it.

Instead of being highly critical of your work to the point where you're never truly ready to share it with the world, dare to do your best, hit submit, and learn from constructive criticism (and weed out the haters).

Instead of having fear of failure and not pursuing that job or that degree – have faith in yourself to do good enough and get better with time. And if you fail, be proud that at least you tried.

Instead of judging and criticizing others for their imperfections or shortcomings, stop and realize that perhaps this person is doing the best they can for right now with what they have.

"It is not the critic who counts; not the man who points out how the strong man stumbles, or where the doer of deeds could have done them better. The credit belongs to the man who is actually in the arena, whose face is marred by dust and sweat and blood; who strives valiantly; who errs, who comes short again and again, because there is no effort without error and shortcoming; - Theodore Roosevelt

Learn to appreciate your imperfections.

Learn to Love yourself more.

And good enough is better than nothing at all.

And to all my friend's and family, next time you visit.. the house may be messy, the dog unbathed, the desk a mess.. and I'm going to be cool with that. (I THINK.)

I'm a recovering perfectionist and a striving good-enougher.

This is my story.

receive your monthly dose of wellness straight to your inbox

Just a human being - choosing more being and less doing. Slowing down. Enjoying the journey of life. Practicing gratitude. Smelling the roses. Choosing happiness above all else - and sharing my thoughts with the world as I find my way. Let's sprout some zen together. :)

A food and holistic wellness blog for a better you. ✨
Healthy recipes with a dose of positivity ✌
Feed your mind. Feed your body. Feed your soul. ❤